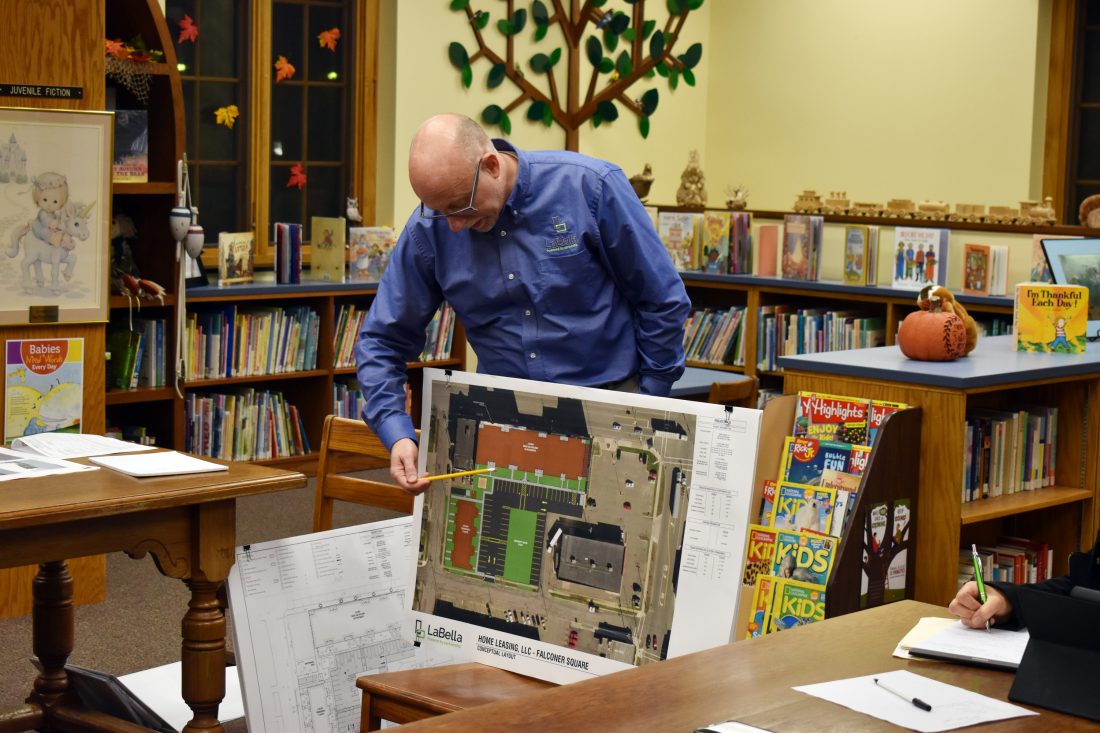 Dan Brocht of LaBella Associates is pictured Wednesday during a meeting of the Falconer Planning Board. Preliminary site plans for the Falconer Square development project were discussed and later approved by the planning board. P-J photo by Eric Tichy

FALCONER — A redevelopment plan in the village has received its first official backing.

The Falconer Planning Board on Wednesday approved a preliminary site plan by Home Leasing LLC to develop Falconer Square. The project includes a mixed-use building for commercial space and apartments and another three-story townhouse complex.

Representatives from Home Leasing and LaBella Associates, the architectural firm working on the project, were present at the planning board meeting.

According to the site plan, Falconer Square would include 39 apartments in the structure along West Main Street. The front of the first floor would be made available for commercial space, with the rear and second and third floors for apartments.

The townhouses, which would be situated along Davis Street, would be comprised of 14 units.

Dan Brocht, a civil engineer with LaBella and designer for the project, said both buildings are meant to blend into the surrounding area.

Falconer Square, according to preliminary plans, would also include offices for management, a laundry facility, fitness room and bike storage. Scheduled in the rear of the properties is 7,200 square feet of green space.

“The goal was, is and will be to make these buildings fit into the community and the existing surrounding area,” Brocht said. “These are very early (designs). As we go through the process the architects will refine, take in input and be able to present a 3-D rendering of what facades will look like exactly.”

Added Adam Driscoll of Home Leasing: “We think this is moving in the right direction. We’d like to keep going down this road.”

After about 45 minutes of discussion, the planning board unanimously approved the plans. Brocht told the board that because the site plan is preliminary, he expects to return when a final plan is designed.