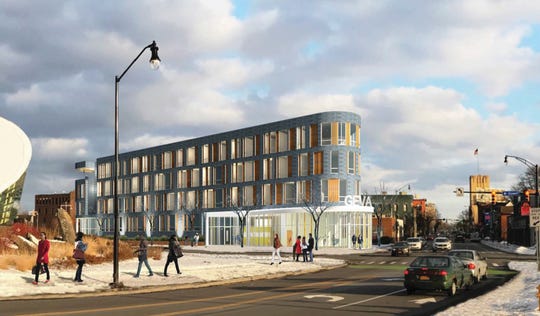 PathStone plans to build a 54-unit, mixed-income apartment building, in partnership with Geva Theatre Center, on the last Inner Loop East parcel. This view is looking east, with Monroe Avenue in the foreground, The Strong National Museum of Play to the left and Howell Street extending along the visible side of the building. (Photo: CJS Architects/PathStone)

This is the second time Warren has chosen a developer for the southernmost parcel, extending from Monroe Avenue along Howell Street. Plans for the previous team changed after last summer's selection, leading the city to go back out for proposals.

PathStone's plan shows a four-story, 54-unit mixed-income housing project with supportive services. Geva's space is a a glassed-in, street-level carve out closest to the Monroe Avenue corner. Geva would have three flexible studio spaces for classes and workshops in acting, dance, music and could utilize the space for rehearsals; or partner with community groups.

"It's going to be active morning, noon and night," said Geva artistic director Mark Cuddy. "I think it's an opportunity to get outside of what we're doing right now, and hopefully have a deeper impact" in the community.

Site 7 is at the southern end of the Eastern Inner Loop redevelopment area, and extends from Monroe Avenue (shown in distance) along Howell Street (on the right). (Photo: Brian Sharp/@sharproc)

Total project cost is estimated at $21 million. Construction could begin in fall 2020. City Council still must approve sale of the parcel, and any financial assistance.

The city began work nearly five years ago on a $22 million project that removed the eastern led of the Inner Loop, filling in the multi-lane roadway and creating an at-grade street with six acres of shovel-ready development sites.

Thursday's announcement brings the total Inner Loop East investment to $229 million, 534 housing units (have of which are deemed affordable units), and 152,000 square feet of commercial space, according to the city.

Elsewhere on the Loop: New designs for 'the jewel' of Inner Loop include art walk

A ribbon cutting is being planned for next week at Charlotte Square on the Loop, a 50-unit, mixed-income development with eight units set aside for formerly homeless ex-offenders assisted by Spiritus Christi Prison Outreach. Developer Home Leasing plans to start work in January on its next Inner Loop parcel, between East Avenue and Broad Street.

That 72-unit apartment building, to be called Union Square, will cater to low- and moderate-income renters, while setting aside 21 units as supportive housing for formerly homeless Trillium Health clients.

Between Broad and Howell is The Strong's Neighborhood of Play. Site work on two additional buildings will begin next month, with two more to begin next spring. The parking garage should be completed by the end of the year. Start dates for the museum expansion and hotel construction were not immediately available.

Mayor Lovely Warren announced the award of development rights Thursday to PathStone, which will partner with Geva on the seventh and final Eastern Inner Loop site. The new parking garage under construction at The Strong National Museum of Play is in the background. (Photo: Brian Sharp/@sharproc)

The site of the PathStone-Geva project previously was awarded to developers Tom Ferrara and Doug Jerum. When selected last summer, they owned and planned to raze an adjacent building, then combine the parcels for a $30 million mixed-use development with more than 100 affordable apartments.

After their selection, however, they were able to lease the adjacent building to Sherwin Williams and revised their plans and affordability mix. The city opted to put the parcel back out for proposals, leading to Thursday's announcement. Ferrara and Jerrum recently sold the adjacent property to a Montreal investor.

The city, meanwhile, is soon to begin interviewing firms to study full or partial removal of the northern Inner Loop. That project would span 21 acres, nearly three times the size of the eastern Inner Loop project, and city officials are hinting that it could be a hybrid project that preserves some of the sunken highway.