OSWEGO — The Port City’s skyline has drastically changed in recent years via the construction of several large developments, starting on the west side and now moving across the Oswego River.

Commuters and residents have likely noticed the towering East Lake Commons — the latest and one of the final — state Downtown Revitalization Initiative (DRI) projects coming to fruition on East First Street. Oswego was awarded $10 million in 2016 through the state DRI, a program aimed at spurring investment in downtowns across the Empire State.

“Our apartments will have beautiful kitchens, balconies with incredible and beautiful views, and more,” said Houppert, whose firm is leading the project. Tenants living in the apartments would also have 24-hour maintenance available, along with on-site laundry and on-site trash, she said. 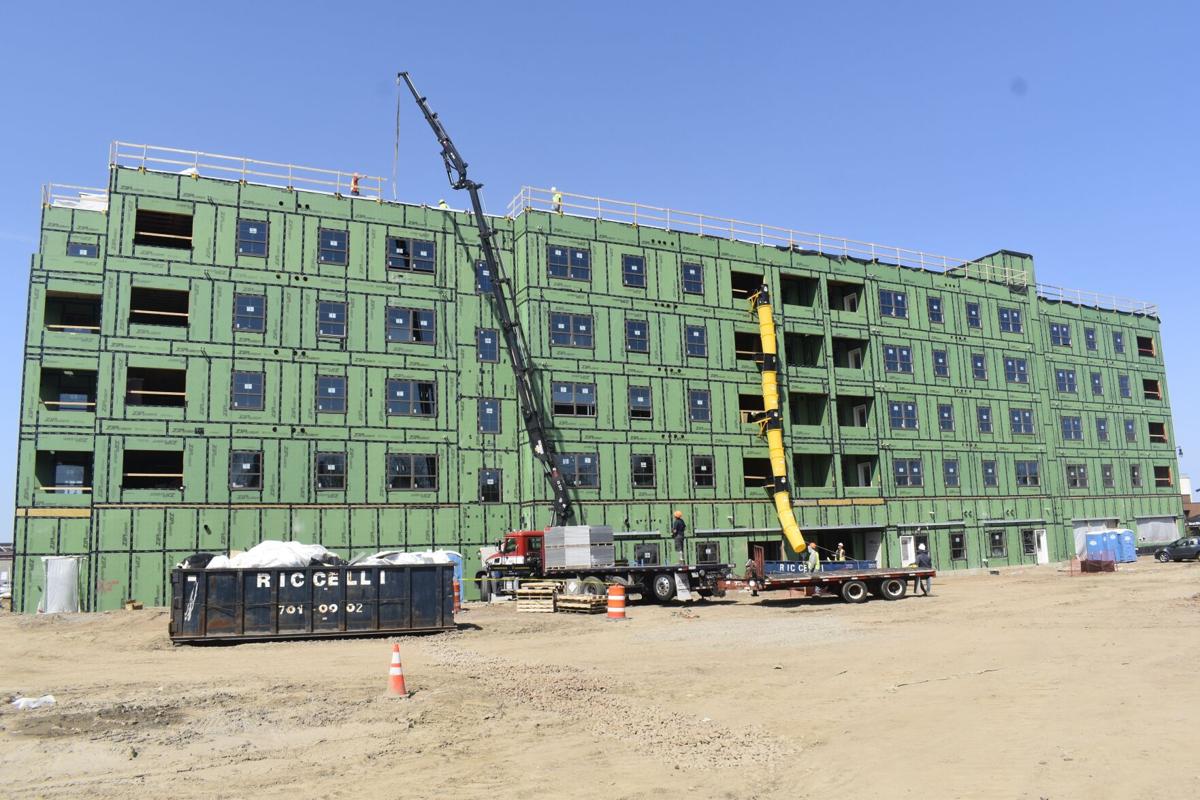 The upcoming East Lake Commons, pictured above, is the latest project to utilize funding from the $10 million state Downtown Revitalization Initiative grant awarded to the Port City in 2016 for improvements within the downtown area. The Commons — anticipated to finish by the end of the year — will have enough room to accommodate 70 residential units and a commercial space once finished. 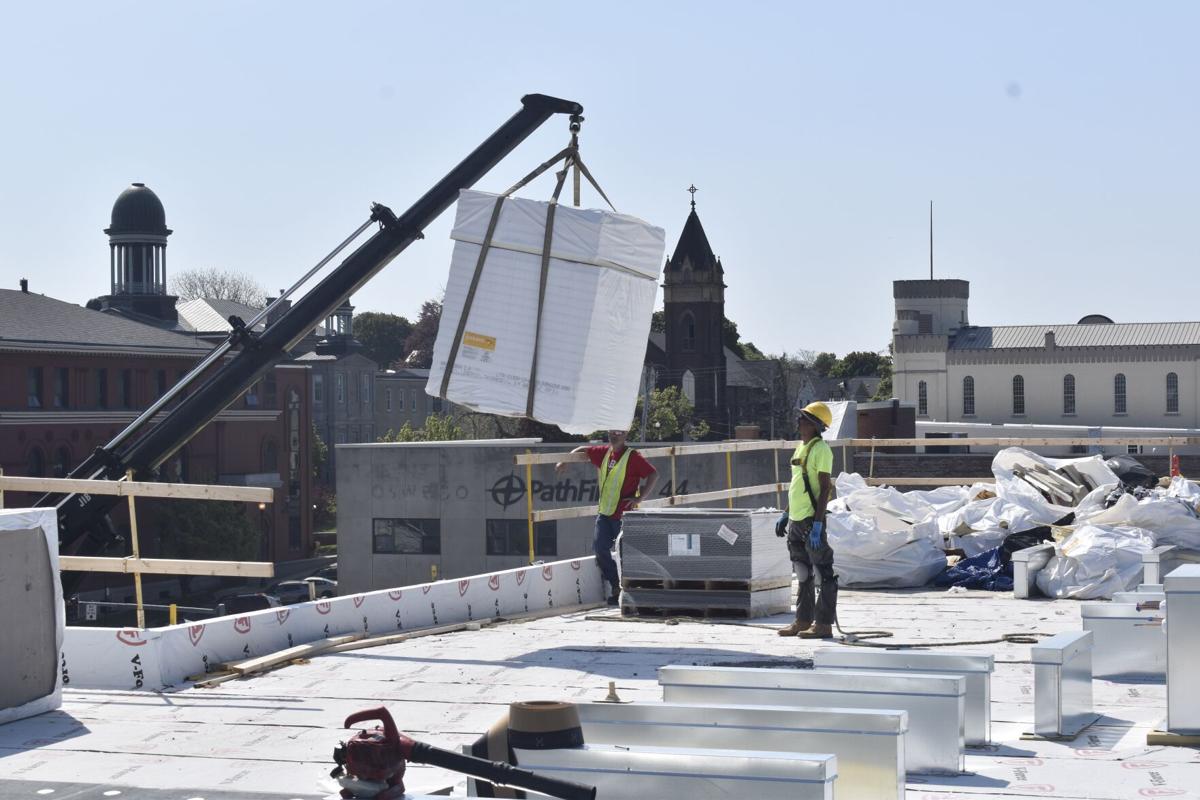 Contractors with Home Leasing Construction, a sud-division of East Lake Common's parent company, Home Leasing, are seen above this week receiving rooftop building materials from a crane stationed on the ground. 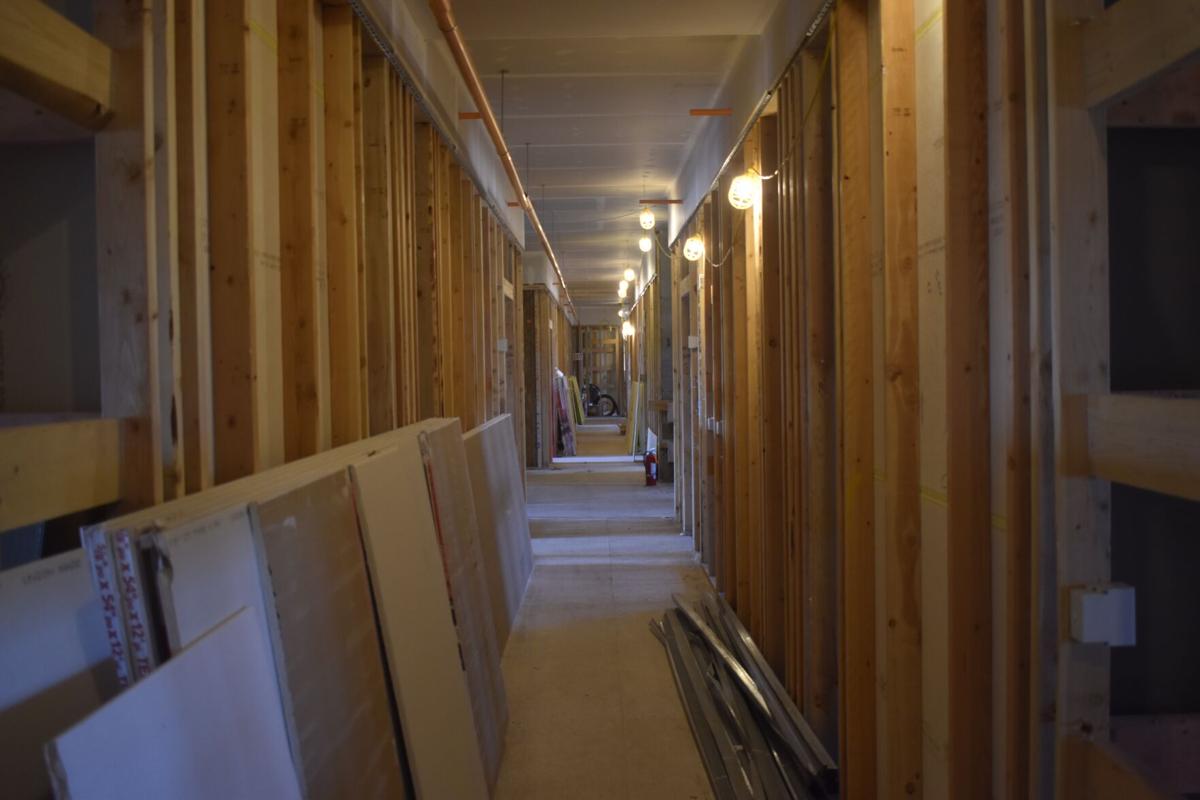 The third-floor inside hallway currently within the East Lake Common shows the walls mid-construction. the hallway is anticipated to be finished by the end of the year and contractors are working diligently to keep on scheduled for the anticipated November completion, officials said. 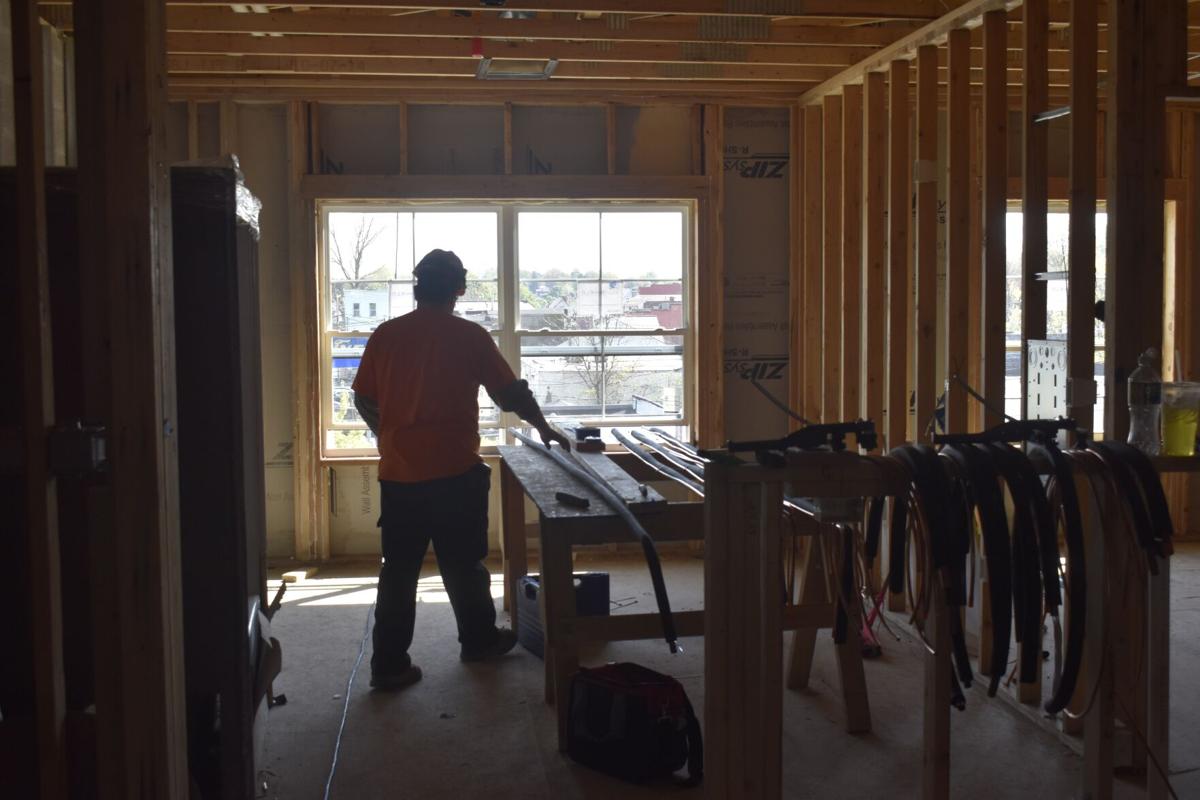 A contractor with Home Leasing Construction looks out a window as they get construction material ready for installation inside the soon-to-be living area of a third-floor residential unit in the upcoming East Lake Commons. 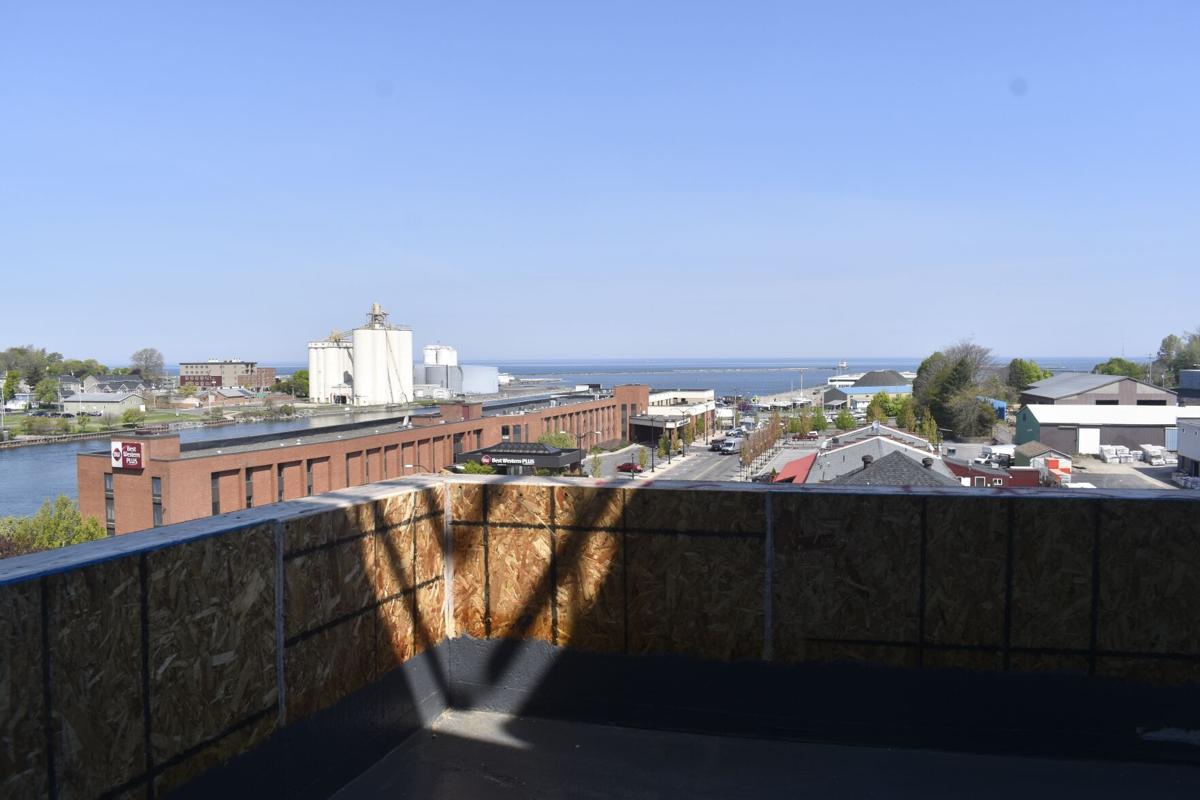 The view generated form the fifth-floor apartments on East Lake Common's northern-end is one of the premier benefits tenants will have available to them as they take in the "beautiful and stunning" view of the Oswego River and Lake Ontario from their balconies attached to their residential units, according to project officials. 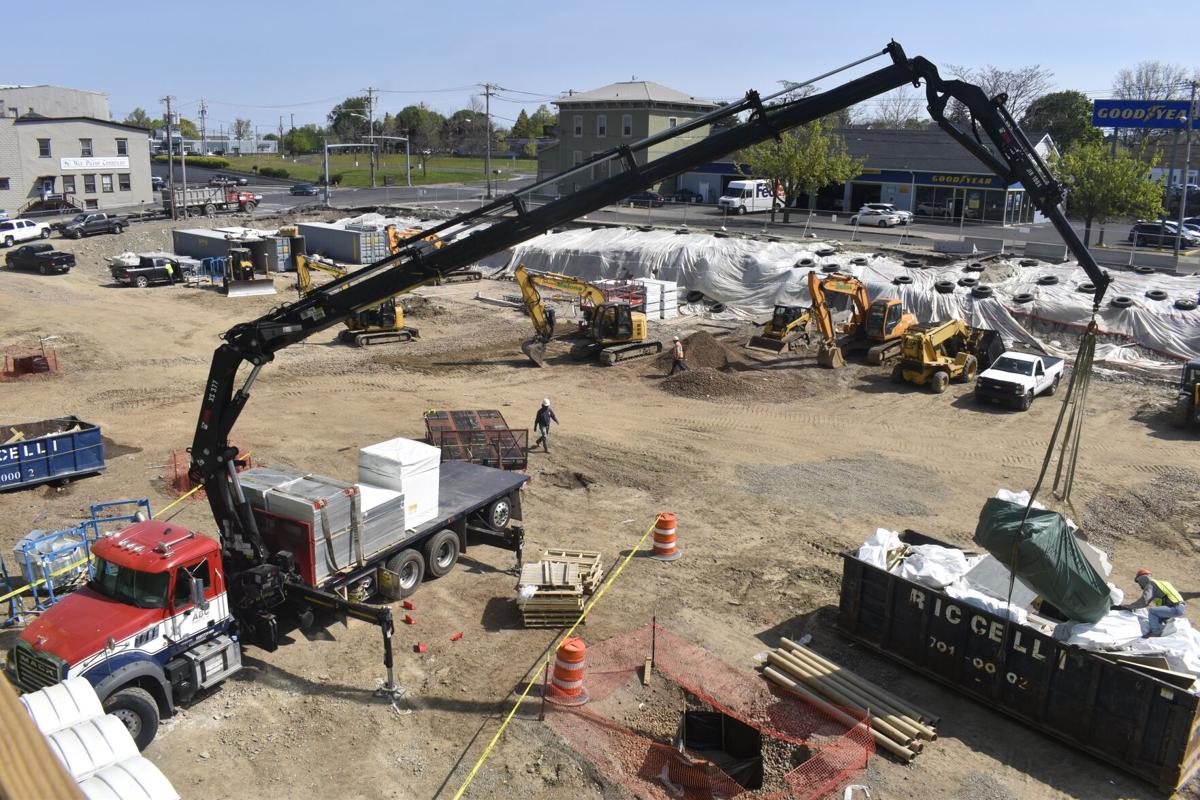 Large heavy-duty cranes this week could be seen loading rooftop construction materials to contractors awaiting their delivery while working on the East Lake Common's rooftop as the building draws closer and closer to it's anticipated November completion date. 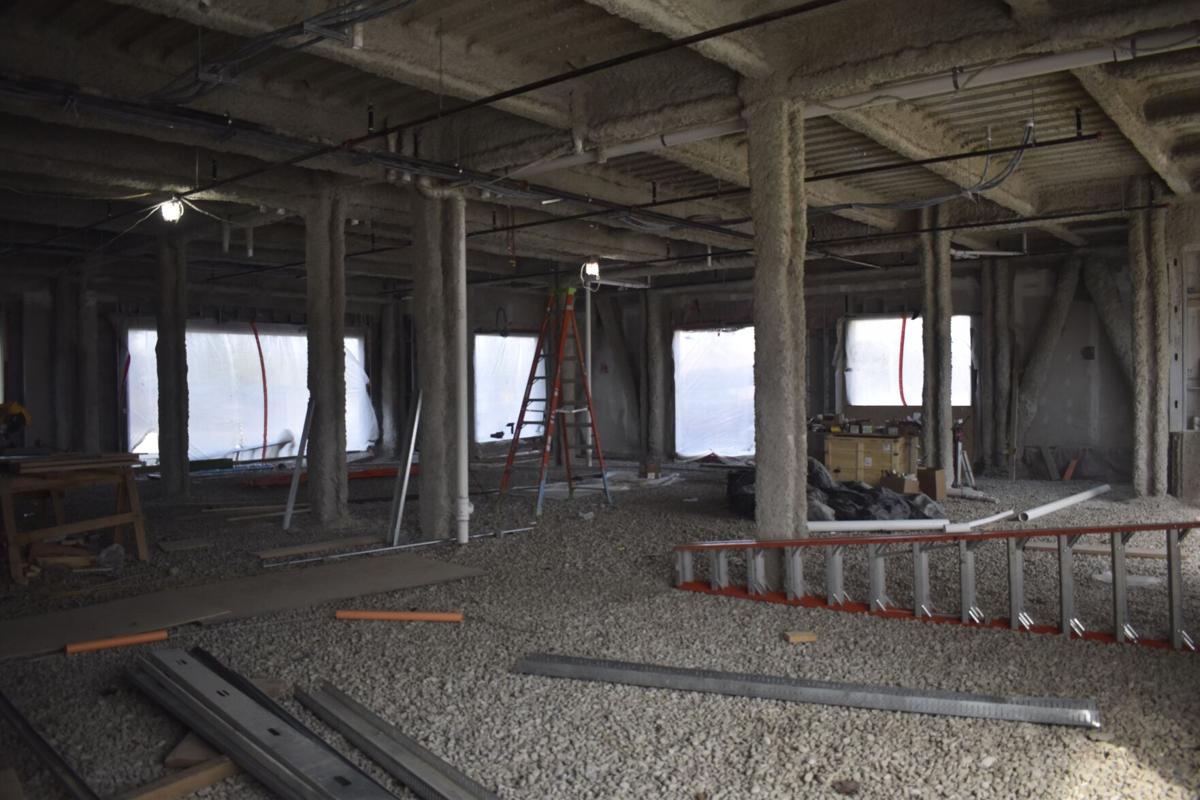 East Lake Common's upcoming retail space, pictured above mid-construction this week, is expecting to receive concrete fillings within the next few months as contractors prepare this "blank slate" of a commercial space, which could be outfitted to host any time of business from a restaurant to a retail space, according to project officials.

Officials have lauded the project as part of a potential rejuvenation of the city’s east side, and hope East Lake Commons — combined with nearby developments from Oswego Health and another housing complex several blocks south on East First Street — will lead to further investment along the east side of the Oswego River.

“The east side of downtown is really making a strong comeback,” Oswego City Mayor Billy Barlow said. “Most people think the west side has been the focus but if you look at the projects taking place on the east side, there is just as much investment taking place there.”

Barlow said the East Lake Commons site and other recent projects would bring more pedestrian traffic and economic activity to the east side.

The project broke ground shortly after the plaza’s mid-2020 demolition and has “been going well,” is approaching crucial construction milestones, according to Site Superintendant Ruben Parr.

“Within the next few weeks, we’ll be working on the exterior of the building and siding and installing the brick facade and masonry on the walls,” Parr said.

During an exclusive tour for The Palladium-Times this week, Project Manager Tyler Schneider said the building is on track for a November completion date.

Schneider said the facility would have features that ensure equal living opportunities for residents seeking housing, including the installation of fixtures that will light up if a doorbell is rung for hearing-impaired residents.

Walking through the half-finished building and dodging contractors working on electrical, plumbing and heating, Schneider pointed out balconies overlooking the city with views extending all the way to the Lake Ontario horizon. Hanging electrical wires will soon be bound, strung and connected to the grid, to be replaced by ceiling tiles, new paint and ornamental features around the building as it transforms from a construction site into a livable, workable building

The site work has been augmented by local sub-contractors Shawn Malone Excavating for site work, Interstate Reinforcing for concrete work and J&A Mechanical for plumbing.

The upcoming 3,000 square foot commercial space located on the building’s northern end will be a “blank slate,” Houppert said. The space, once finalized, would be able to accommodate a restaurant, retail space or other uses.

Houppert said Home Leasing chose Oswego in part because of the recent wave of development throughout the community and the DRI funding, which provided roughly $2 million for the project. Houppert said city officials have welcomed the organization and project with “open arms.”

“We are excited to come to Oswego because of all the activity, development and excitement,” she said, adding support from Barlow and others in the city was “really encouraging and very exciting.”

As the opening date draws closer, Houppert said apartment tours would be available and more information would be released to the public. Prospective commercial tenants are urged to contact Sutton Real Estate Company to learn more about the forthcoming commercial space.